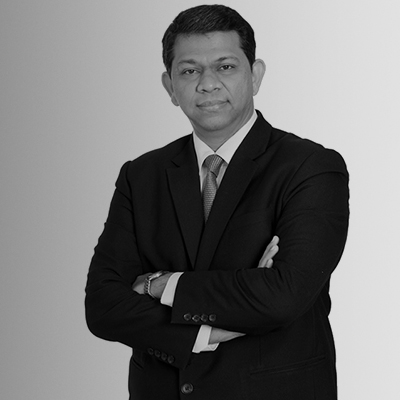 Ganesh Chandru is an Executive Partner at Lakshmikumaran & Sridharan and he heads the firm’s Arbitration Practice.

His practice encompasses advising and representing parties in international arbitration matters (under Rules of SIAC, ICC, LCIA, SCMA, UNCITRAL as well as ad hoc) and in arbitration matters seated in India that are conducted pursuant to the Arbitration and Conciliation Act, 1996. He also advises and represents parties in litigation matters before the courts. He has handled cases arising from transactions relating to Oil & Gas; Infrastructure, Projects & Construction; Power / Energy; Telecom & IT; Banking & Finance; Joint Ventures; and General Commercial matters.

During his law school days, Ganesh was an avid participant in moot court competitions and he represented India at the Philip C. Jessup International Law Moot Court Competition in Washington DC, USA.

On being awarded the NUS Research Scholarship, Ganesh moved to Singapore in 1998. He was conferred a Master of Laws degree by the National University of Singapore for his thesis on ‘International Commercial Arbitration and Information Technology’.

Prior to relocating to India in 2015, Ganesh spent more than 16 years in Singapore specialising in International Arbitration and Dispute Resolution. He worked with some top International and Singapore law firms.

He was the Counsel & Assistant Registrar of the Singapore International Arbitration Centre (SIAC) between 2002 and 2007. He supervised the administration of about 500 arbitrations during his 5-year stint at SIAC and also pioneered SIAC’s initiatives in India.

Between 1994 and 1998, he practiced with one of the top set of Chambers at the Madras High Court during which time he represented large conglomerates, financial institutions and high net worth individuals in litigation and arbitration matters. He also assisted eminent Senior Counsel in matters before the Madras High Court at Chennai and before the Supreme Court of India at New Delhi.