Use of ‘Particular Market Situation’ provision in Anti-dumping Investigations

Article 2 of the WTO Anti-dumping Agreement provides for provision regarding determination of dumping. As per Article 2.1, a product is considered as being dumped if the export price of the product is less than the normal value. Article 2.1 of the Anti-dumping Agreement provides that domestic selling price of like article in the exporting country shall be considered as normal value. However, Article 2.2 allows the investigating authority of a country to reject domestic prices for the purposes of calculating normal value in the event that the domestic sales of the like product do not permit a proper comparison because they are (i) not in the ordinary course of trade; (ii) are low in volume; or (iii) affected by ‘particular market situation’. If any one of these situations is established regarding the domestic sales price of the product, the investigation authority can opt for alternative methods of determination of normal value.

Australia imposed anti-dumping duty on the import of A4 copy paper from Indonesia on 18th April 2017. Australian Anti-dumping Commission (“ADC”) found that a market situation existed in the Indonesian A4 copy paper market because of strong influence on raw material inputs. Therefore, the ADC determined that the domestic sales under such a market situation were not suitable for use in determining normal value. Indonesia challenged this aspect of the ADC determination, among others, before the WTO DSB. Panel Report was issued in this case on 4th December 2019. [see endnote 1]

The Panel Report issued in Australia — Anti-Dumping Measures on A4 Copy Paper also stressed that mere existence of a ‘particular market situation’ in a country is not sufficient to reject domestic prices. Investigating Authority is required to examine whether ‘a proper comparison’ between domestic and export price is permitted or not. Only if a proper comparison cannot be made because of existence of ‘particular market situation’, can the investigating authority reject the domestic prices.

The Panel concluded that a ‘particular market situation’ is when there exists a unique set of circumstances relating to the market. The Panel refrained from assigning a more specific meaning to the term, since the Panel observed that analysis must be made on a case-to-case basis.

Panel held that distortion of raw material prices arising from government action can result in a particular market situation and therefore determination regarding ‘Particular Market Situation’ by ADC was consistent with Article 2.2. However, the Panel observed that the rejection of domestic prices was not warranted, since ADC did not establish the lack of comparability between domestic and export price of like product i.e. A4 copy paper.

Following diagram is illustrative to summarize the observation of the Panel: 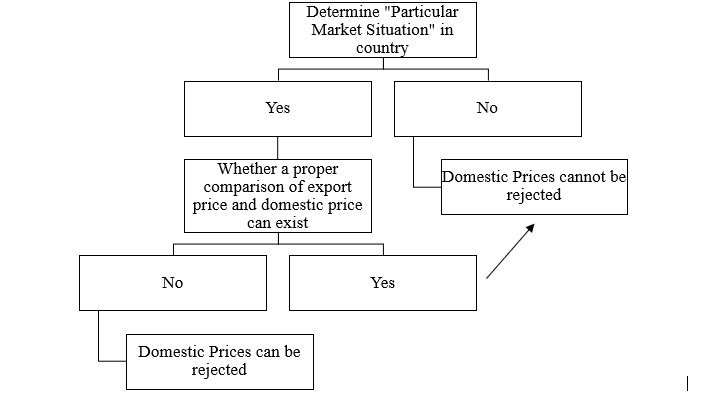 When can the ‘domestic prices’ and ‘export prices’ be considered as incomparable?

The Panel went on to hold that no blanket rule can be constructed for the purposes of examination, since the approach would depend on the factual matrix of each case. For example, in the present case, Indonesia argued that the input costs were distorted for products which are sold in the domestic markets, as well as for products which are exported. However, the Panel held that other factors such as prevailing conditions of competition, existing relationship between price and cost, etc. must be examined in order to determine how a producer/exporter can enjoy the benefit of the decreased costs differently in each market. [see endnote 3]

Rejection of actual cost reflected in the records of the exporter

Article 2.2.1.1 of the Anti-dumping Agreement provides that costs shall ‘normally’ be calculated on the basis of records kept by the exporter or producer under investigation, provided that such records are in accordance with the generally accepted accounting principles of the exporting country and ‘reasonably reflect the costs’ associated with the production and sale of product under consideration. In EU- Biodiesel [see endnote 4] , the EU commission decided to disregard the actual recorded cost of soybean to calculate the cost of production of biodiesel because those costs were found to be artificially lower due to the distortion created by the Argentine export tax system. The Appellate Body observed that costs being ‘artificially low’ due to an existing export tax system was not a valid reason to determine that the costs were not reasonably reflected. It further held that the EU Commission was obligated to rely on the records maintained by the producers.

The Panel observed that, unlike the decision by the EU Commission in EU-Biodiesel, rejection of cost by ADC was not because it was not ‘reasonable’ but because ‘cost of producing pulp was substantially less than the competitive benchmark’ [see endnote 5]. The Panel further acknowledged that because of the use of work ‘normally’ in Article 2.2.1.1 there may be situations where the exporter records may need to be rejected despite them being (i) in accordance with the generally accepted accounting principles of the exporting country and them (ii) reasonably reflecting the costs associated with the production and sale of the product under consideration. However, the Panel still considered ADC decision as inconsistent with Article 2.2.1.1. It observed that the ADC did not examine, in accordance with Article 2.2.1.1, whether costs of exporter were GAAP consistent and reasonably reflected costs associated with the production and sale of A4 copy paper.

Australia’s rejection of exporter’s cost has been considered as inconsistent with Article 2.2 and Article 2.2.1.1 of the Anti-dumping Agreement but the critical issue regarding the use of ‘particular market situation’ provision, which formed the basis for the complaint by Indonesia, still lacks clarity. Interpretation of the term ‘Particular market situation’ by the Panel is overly broad and ignores relevant ‘context’ under Article 2.2 and also conflicts with requirement in Article 2.2.1.1. as interpreted by the Appellate Body in EU-Biodiesel.

Thus, the term ‘particular market situation’ should also be limited in scope and should cover other such similar type of market situations, which directly affect domestic sales transaction prices but are not covered by the earlier two possibilities. [see endnote 6]

[The author is an Associate in International Trade Practice, Lakshmikumaran & Sridharan, New Delhi]